Only when I was seven years old, I got conscious of the civil war. At times, I couldn’t go to school because we repeatedly had to leave our house to escape from the soldiers it got dangerous. As a child, I liked going to school. I wasn’t the best student in my class, but one of the best. When I was in my sixth year, all schools got closed because the teachers were too afraid to go to work, and the parents were afraid of sending their children to school since many died on their way to school.

My sister also passed at some point. She was suffering from urgent kidney disease and in the war zone; there was simply no access to medicine. After she died, my parents were even more worried about me. I was 12 years old and they were afraid, I could join the freedom fighters, which was quite common. They were also worried that I could get arrested by the soldiers since every 12-year-old could have potentially been a member of the freedom fighters and being a suspect was enough to be executed.

When my sister was ill, we often had to drive for hours and wait for ages to see a doctor. In those times, my mother always whispered into my ear, “Look! One day, when you are a doctor, we don’t have to travel so far anymore.” Due to my sister’s illness I already knew back then that it is very hard to find a doctor during war and how expensive it is. You need money in order to get medicine. That was when that desire was born that I also wanted to be someone who can help the people like that. But it was only a wish; a dream.

My mother had some money because she sold a piece of land and her brother who was living in Hamburg lent her some money. She found a trafficker who promised to bring me to Germany to my uncle, whom I had never met before, within one week. My mother accompanied me from the north to the south. It took us three days to cover the 400 kilometres.

On January 6th my journey started via Singapore and Dubai to Togo. When I arrived in Togo, there were already more than 250 Tamils from the north of Sri Lanka waiting for the continuation of their journey to America or Europe. I waited there for six months until they brought me over the border to Ghana. But from there, we could not move on, so we went back to Togo and later from there via Benin to Nigeria. Then I flew from Lagos via Madrid to Frankfurt where I arrived in the night to September 10th in 1991.

The Federal Border Police handed me over to the Youth Welfare Office, because as a 13-year-old, I was an unaccompanied minor refugee. On September 11th, my uncle picked me up from the children’s home. He applied for guardianship for me and in Hamburg we filed the application for asylum. If I hadn’t been allowed to stay with him, I would have ended up on a refugee-ship. In the 90s there were two big ships in Hamburg where refugees got housed. I am glad that I didn’t have to go there and it is important to know why.

When you arrive to a foreign country, the highest priority is to make the foreign familiar. That is how you are successful in life. How do you do that? First of all, you need to be able to communicate with that country and to enter into dialogue with it. That is, you have to learn as much German as possible. Secondly, you need to learn, how people think in that country. Every country and every culture has certain characteristics. That is, you need to get to know German culture. The point is not to take on the culture or religion yourself, but to familiarize yourself with the unknown environment.

I was lucky to live in Hamburg with my uncle and to go to school where we did not only have theoretic lessons in the classroom, but where they took me to excursions to get to know the surroundings. They went hiking with me, we went on cycling tours, we did barbecues and picked strawberries and apples. That is, we went out of Hamburg and got to know the country. The only image many people have of Germany comes from pictures in magazines and from watching TV. But Germany doesn’t only have skyscrapers and harbours like in Hamburg. That means you have to get to know the country and the people so that this foreign country is not foreign anymore at some point. You have to show interest and motivation for that yourself. I am better in German than in my mother tongue, because I went to school here; I did my A-levels and in studied. I think that is something that I recommend any refugee: learn the German language and get to know our culture. So, and now the story continues. 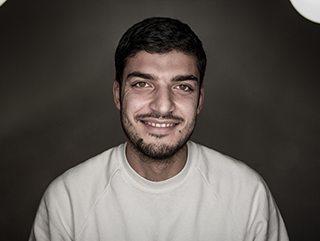